CATHOLIC Archdiocese of Abuja on Thursday said it has concluded arrangement for the unveiling of a new social media app for adherents of the Catholic faith all over the world.

Cardinal-Onaiyekan The unveiling ceremony of the social media app, which is to be known as “Wow Catholic”, will be graced by prominent personalities including Archbishop John Cardinal Onaiyekan, Deputy Senate President Ike Ekweremadu, and Innocent Idibia also known as Tuface on July 15, in Abuja.

Speaking on the motives behind the initiative, Chief Executive Officer of the project, Fr. John Oluoma, told reporters the need to leverage on mobile technology for the promotion of scriptural teachings and doctrines of the Catholic church among its nearly 4.2 billion global adherents inspired the project.

The clergyman said the app which possesses the basic features of other social media platforms has extra modules for marriage courses, television and radio channels, as well as inter-religious dialogues among users. Oluoma noted that while the new social media app was designed to accommodate all prospective users, special technologies have been deployed to filter hate speeches and inciting comments while fostering religious harmony among users. He said:

“There is religious freedom and everybody has the license to promote his own religious beliefs without hurting others. So it is for such reason that the “Wow Catholic” which is the first social media app of its kind was developed. “Though the app is for Christians, we have modules for exchanges with people of other faiths.

“You will also not find hate speeches and inciting comments that define the regular social media platforms, because the system will filter whatever is posted for the public domain.”

Other activities expected to add colour to the unveiling ceremony include special talent display by priests and Catholic Merit Awards for distinguished faithfuls across all walks of life.

Culled from Vanguardngr and edited by Mbanugo Onyeka Nelson

Africa’s richest man, Aliko Dangote, has revealed that he is ready to take a wife now. The 61-year-old billionaire business mogul made the revelation in a recent interview with Financial times.

According to the businessman who has been divorced twice, says his busy schedule has prevented him from having any romance in his life. He said it wouldn’t make sense to be involved with someone when you have no time being with that person.

“I’m not getting younger. Sixty years is no joke. But it doesn’t make sense to go out and get somebody if you don’t have the time. Right now, things are really, really very busy, because we have the refinery, we have the petrochemicals, we have the fertilizer, we have the gas pipeline.”

But he agrees that he needs to “calm down a bit”.

In preparation for the July 14 Governorship election in Ekiti State, the Independent National Electoral Commission (INEC) has commenced distribution of sensitive materials.

This was after the materials were earlier received by the Electoral body at the Central Bank office in Ado Ekiti, the state capital, on Thursday.

According to reports  from channelTv,  the materials were then loaded in vehicles for transportation to the 16 Local Government Areas of the state.

INEC in a tweet on their officials handle, @inecnigeria said all vehicles loaded with sensitive materials for the distribution are being tracked to monitor their movement. 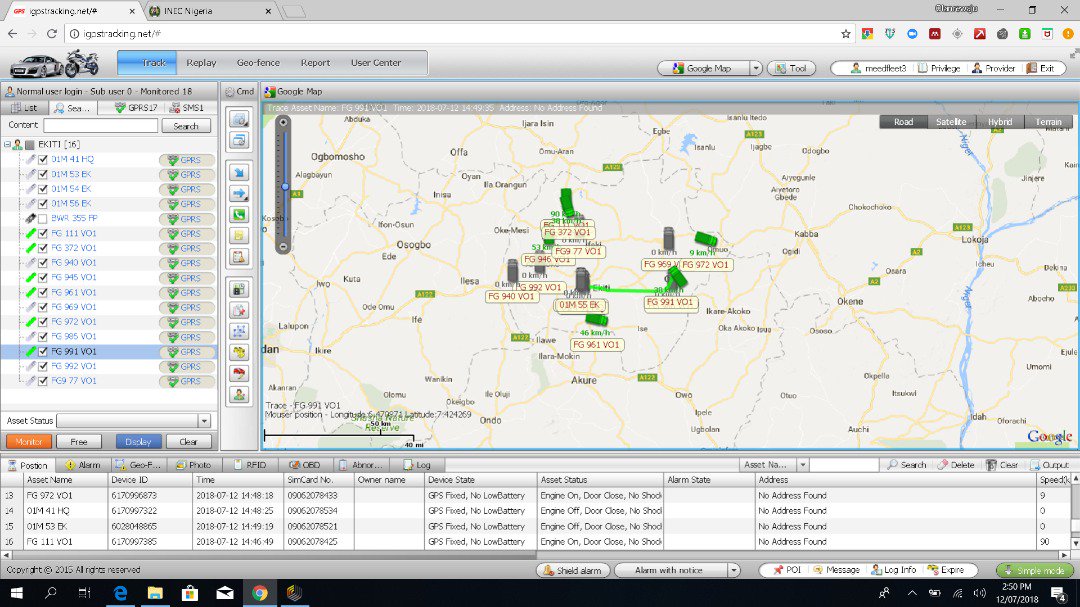 All vehicles loaded with sensitive materials for distribution to 16 LGAs in Ekiti State for the July 14 governorship election are being tracked.#EkitiDecides2018

We called you here to intimate the public through your various media organisations of the movement of huge cash by the federal government to Ekiti State for the Saturday election.

Last week Saturday, two bullion vehicles were moved to the Akure Airport to evacuate cash brought from Abuja by a chattered flight.

The flight landed when it was raining and all staff of the airport were barred from going near the aircraft while the cash was evacuated into the two bullion vehicles.

After offloading the huge cash, the bullion van first moved to the Ondo State Government House in Akure from where they left for Isan Ekiti, the hometown of the APC governorship candidate, Dr. Kayode Fayemi.

We present to you and the entire world, video and photographs of the chattered aircraft as the cash was being offloaded from it into the two bullion vehicles.

From our preliminary findings, N2.5 billion cash was transferred by the Kebbi State Government to an account in UBA, Wuse Zone 4, Abuja. It was withdrawn immediately and moved with a private jet to Akure.

Also, apart from the N2.5 billion, another $50 million (about N18bn) was taken from the $321 million recovered from the late Abacha family.

Our question is, how can a government that claimed to be fighting corruption release billions of naira from the public coffers for the governorship election of a single State? Where is their fight against corruption?

We therefore call on Nigerians to note this wanton looting of public fund by the APC government to fund election of its members.

Lastly, let me use this opportunity also to alert the public of the intimidation and harassment of PDP members by men of the DSS and policemen.

Already, Akin Fakorede, an officer of the Federal SARS has been posted to Ekiti State, ostensibly to play the same ignoble role that he played during the Rivers State election.

Let me say it clearly that no amount of intimidation will scare our people away from the polling units where they will vote for the PDP on Saturday.

We have the people behind us and they are more than ready to give our candidate, Prof. Kolapo Olusola Eleka their votes on Saturday.

The Nigerian police in Ondo State have described the confessional statement of Seidu Sakiru Adeyemi denying he killed Khadijat Oluboyo, daughter of the immediate past Deputy Governor of Ondo state, Lasis Oluboyo, as an “infantile defence”.

According to Femi Joseph, spokesman of the Ondo State Police Command, Adeyemi lied by telling journalists that he did not kill the 25-year-old final year student of Adekunle Ajasin University, Akungba-Akoko.

On Wednesday, Adeyemi had told journalists at the Police headquarters in Akure that he did not kill khadijat but claimed that two men invited by the deceased murdered her.

“She sent me the soft copy of her project on the Whatsapp and told me that she would be leaving Lagos for Akungba on Sunday,” Adeyemi had told journalists on Wednesday.

“On Monday, I received a text message from her that I should send her N2,000 but I was only able to raise N1,000 for her because I didn’t have much money.

“But few hours later, I heard a knock on my door and when I opened, she [Khadijat] was the person I saw and I quickly asked her why she didn’t tell me she was coming to visit me.

“Shortly after, she went out of the room and called in two other boys. She said a boy would be visiting her, but when she came in with the boys I was not comfortable and had to excuse them.

“Later, one of the boys came out to call me and by the time I would enter back into the room, they were with guns and they threatened me.

“One of the boys was even on top of Khadijat on the bed and ordered me to kneel down on the rug and threatened me not to make any move but later they told me to go out and bring a digger.

“By the time I would come back, they had already killed Khadijat and asked me not to tell anyone and they instructed me to dig a big hole so they could bury her…”

But reacting further, Joseph said Adeyemi — not the two fugitives — killed khadijat. He said the Police were alerted by an informant about the devilish act of Adeyemi when the corpse of the deceased was already oozing stench out of the room.

Narrating how the culprit was caught red-handed by the policemen while trying to exhume the corpse of late Khadijat right inside his room in Akure, the police spokesman said: “On the 6th of this month, we were alerted by an informant about what happened and we went to a house of one Saidu Adeyemi, who happens to be the boyfriend of Khadijat.

“Unfortunately, when we got in there, we met him trying to pack the remains of Khadijat, that is to tell you that he had killed her. He killed khadijat and single-handedly looked for digger, dug a grave in his apartment and buried the lady.

“After few days he noticed that the stench of the decomposing body of khadijat was making him uncomfortable. Apparently sensing danger, he had to tell somebody to help him get a sack so that he could park the remains of khadijat and dispose them off but that was how we swooped on him and got him arrested.

“So, his story is too good to be true; the reason is that if you are saying that two men came in to attack Khadijat, we are talking about six days now when those two men came in and you didn’t raise any alarm.

“He [Adeyemi] admitted that he was still the same person that went outside when the two men told him to go and look for digger; he had the opportunity and yet he did not shout for help.

“You know when criminals are put to a very tight corner like this, they are always being funny. I think he is being to be clever by half. We know how to deal with people like him but by the time we get to court he would surely have his days.

“Let him go and inform the court and let us see how he would get out of that way.

“His [Adeyemi] defence is too infantile and doesn’t hold any water because he should begin to talk to court in the next twenty four hours.” Joseph said.

Culled from SaharaReporters and edited by Mbanugo Onyeka Nelson

National Chairman of the Peoples Democratic Party (PDP), Uche Secondus, is currently leading a group of protesters headed for the National Assembly to submit a petition to lawmakers on the alleged assault of the Police on Ayodele Fayose, Governor of