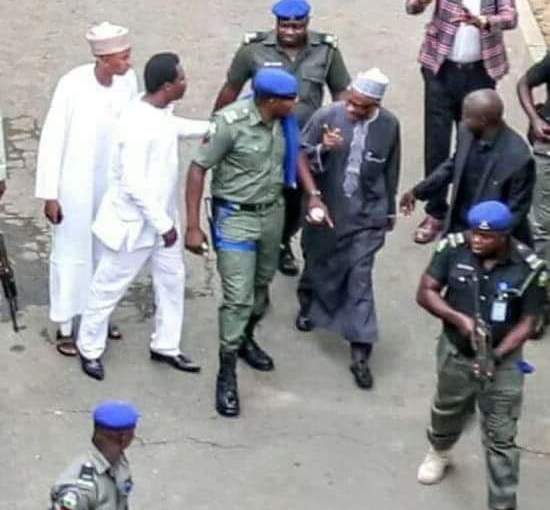 :*
… Suspended two times on corruption , brought back twice by Buhari .
*(1)* The Executive Secretary of NHIS Professor Yusuf Usman who was appointed by President Buhari led govt was accused of corruption raging in billions of naira .

*(4)* On July 2017 , Minister of Health , acting on the report of investigative panel on NHIS boss activities , suspended the NHIS boss .
*(5)* On February 2018 , ‘Mr Integrity’ President Buhari who was out of the country during the panel suspension , returned and reinstated him from suspension even when he was a guest of EFCC .
Who is fighting corruption ?

*(6)* The question is : Why is the Presidency protecting an official of government openly indicted for corruption?
*(7)* On Thursday 18th October , 2018 , NHIC Board after their two days meeting , suspended Professor Yusuf Usman again on corruption related charges .

*(9)* Who gave him policemen ? President Buhari is in charge of Police and by implications backing the suspended NHIS boss .
*(10)* When a Man that promised to fight corruption is protecting his corrupt friends , then Nothing is left in already battered integrity of Buhari regime!

*(11)* Note : NHIS Boss first suspension was approved by Professor Yemi Osinbajo, the Vice President, who was acting President when President Buhari was hospitalized in the UK and Buhari came back and nullified it . Who is fighting corruption ?

*(12)* This is a government that defines fighting corruption only when they want to fight political opponents .
*(13)* When a president assumed the Court of law and empowers himself with powers of set aside administrative panel report , then Buhari create and sustain corruption .
*That indicted NHIS boss have to be given 50 policemen to cover his corruption lines, while Nigerian citizens in Kaduna State are killed like fowls without security should get everyone worried !*
*Buhari Govt is just corrupt full stop*

According to Mbakwe, the sack was as a result of the Sunday broadcast credited to Kanu, which he said was a clear indication that Kanu prefers his dog, Jack, to those murdered in the struggle for the realisation of Biafra.

During a broadcast aired on Sunday from his base in Israel, Kanu mourned his dog and “a few other people” in his compound, who lost their lives when troops of Operation Python Dance invaded his residence in September 2017.

“The Army of the zoo killed my dog Jack and a few other people in my compound. I am sorry for what my sureties are passing through, but I want to assure them that they will have a special place in Biafra. I shall not be honouring the court,” the IPOB leader had said in his broadcast.

However, the group said Kanu was an “insensitive and callous leader that has no value for his own followers but rather his dog, Jack whom he paid tributes to after his long disappearance from the struggle”.

They also referred to him as a “traitor not worthy of any leadership position anywhere in the world”.

The international media arm of the proscribed group had announced Kanu’s sack in 2017, noting that he was “dismissed and removed as Director of Radio Biafra following extensive and intensive consultations”. The group said the reasons for which Kanu was removed include “personalisation of the Biafran struggle and derailing from the core objectives of IPOB as a grassroots movement”.

Meanwhile, a statement by Olisa Mbakwe, Director of Strategy and Documentation of IPOB, obtained by SaharaReporters on Monday, read: “On Sunday, October 21, 2018, an individual, Mazi Nnamdi Nwanekaenyi Kanu, claiming to be the leader of the Indigenous People of Biafra (IPOB) and Director General of Radio Biafra made a live broadcast that has left us perplexed, because it is unthinkable that someone will impersonate IPOB to the point of plotting to abuse the organization to hurt the interest of Biafra.

“The strength of the Republic of Biafra that we are struggling to actualize, is in its human resources as embodied in our versatile youths that dominate the fields of play across sectors of human endeavor; the country we have set our vision on creating is therefore not to be made up of tombstones but of people fulfilling their life missions as ordained by God.

“Nnamdi Kanu relinquished his position as the leader of IPOB struggle the day he deserted our members to die, when they had mobilized to stand for our belief in Biafra at his residence in Afaraukwu. Several of our members were injured and some died in that encounter and even after emerging from hiding more than one year later all Kanu could do was to desecrate their memory with his radio broadcast. Nnamdi Kanu vividly, specifically and particularly recalled his family dog, Jack, by name while he dismissed our members that died as mere statistics — he only recalled them as 28 IPOB members.

“Even if Kanu had not deserted, there is no way we would have continued under the leadership of a man that values his family dog more than Biafrans.

“We are not unmindful of how Kanu struck the deal that granted him bail in the first place while abandoning our members, Benjamin Madubugwu, David Nwawusi, Bright Chimezie Ishinwa and Chidiebere Onwudiwe to languish in jail. Instead of using his freedom to accelerate the freedom of these authentic freedom fighters, he rather went about Biafra land receiving obeisance from Biafrans like a monarch, when our dear land is completely republican. The travails of these our brothers are not over yet and might have been worsened by Kanu’s live broadcast, which has totally upset us.

“In line with the decisions earlier announced on Radio Biafra on November 17, 2017 that Mazi Ezenwachukwu Sampson Okwudili is the new director for the radio, we reaffirm that Mazi Nnamdi Nwanekaenyi Kanu remains sacked as the Director of Radio Biafra and has also been removed as the leader of IPOB since he has proven he is not a worthy leader that respects the sanctity of the lives of our members.

“Following interventions by our leaders, considerations were being made to reverse the earlier announcement but after studying the Kanu’s live broadcast from Israel we came to the painful conclusion that we cannot make progress with our vision of Biafra, when one man has completely personalized and commercialized the struggle. The decision to drop Nnamdi Kanu from playing leading roles in IPOB affairs is hereby upheld. We shall announce replacements after consultations with the various stakeholders.”